I'm not creative. I'm not worthy of this video. Seriously

My contribution to the year end lists -

Company of Thieves - Oscar Wilde - (new like Passion Pit, remains to be seen if this will stick around)

Miranda Sound - The Lull of Youngstown - great lyrics and musically very indicative of what this band was about.

Raphael Saadiq - Just love the way this record sounded.
Posted by Neal at 11:39 AM No comments: 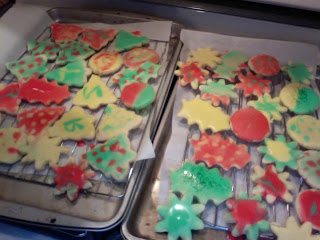 I've never used the glaze-type frosting for sugar cookies. I kinda dig
it. The frosting is the normal powdered sugar/extract/milk type but
the addition of corn syrup creates the glaze effect. I'm a sucker for
the delish looking supermarket sugar cookies and now I know why. Mmm.…
Posted by Neal at 7:11 PM No comments: 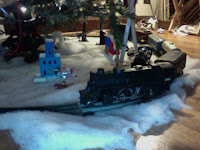 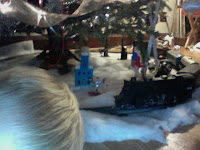 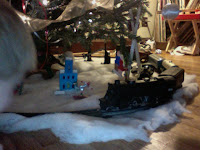 Friday night at the Summit was the classic music-fan tradeoff: You were pretty much guaranteed an evening of loud guitars and hook-filled rock ’n’ roll, but you’d have to wait for it.


Like so many weekend shows, the three-bill night was supposed to start at 10 p.m., but it didn’t get crankin’ until around 11. Which makes for a late night.


But I can’t complain too much. With a lineup of rock-solid Columbus vets like Pretty Mighty Mighty, You’re So Bossy and headliners the Bush League All-Stars (who were releasing their new album that night), I figured it would be worth the wait, and it was.


Kicking off the night was Pretty Mighty Mighty, Jon Chinn’s on-again off-again project since the ’90s. These days, Chinn spends most of his time working as the Lincoln Theatre’s technical manager or as an engineer at Central City Recording, so I always consider it a treat when he takes the stage, either with Pretty Mighty Mighty or his other local supergroup, Jon Chinn + 1803. Chinn’s slightly nasal vocals always remind me of Sunny Day Real Estate (in a good way). There were plenty of missed notes, broken strings and tuning issues that gave the set an unrehearsed feel—sometimes detrimentally so. But songs like “Sleepless” and “Ski Instructor” were as tight as ever.


According to Chinn, there’s going to be a new Pretty Mighty Mighty record next year. Fingers crossed. Up next was You’re So Bossy, a trio whose individual résumés read like laundry lists of Columbus legends.


Singer/guitarist Sam Brown played drums with the Sun, Gaunt and New Bomb Turks, plus playing live with RJD2 and others. Jovan Karcic, who used to play guitar in Gaunt, now drums for Brown, and the Haynes Boys, Burn Barrel and the Alwood Sisters also appear in his résumé. And then there’s bassist Phillip Park: Thomas Jefferson Slave Apartments, Haynes Boys and Burn Barrel.


Even with all that Columbus music history behind it—and despite Brown’s knack for writing some of the best power-pop songs in Columbus—You’re So Bossy still seems to fly under the radar, though it’s hard to say why. On Friday night, Brown did it all with just a distorted acoustic guitar. And Karcic’s drumming was absolutely mesmerizing.


The Bush League All-Stars’ résumé isn’t too shabby either, with former members of the Evil Queens, Tiara, the Celebrity Pilots and, of course, singer/guitarist Dan Spurgeon of Greenhorn fame.


The group’s new record, Cedar Knees, has huge guitars all over the place, but the All-Stars sounded even bigger, badder and better live. And yet, the guitars weren’t so thick that they overpowered Jess Faller’s additions on keys, which were essential to filling out the sound—a sound that’s so familiar, yet distinct: part blue-collar rock ’n’ roll, some grunge-y bits, a little bit of roots and a lot of power-chord bliss.


Or, as fellow writer Rick Allen wrote last week, the Bush League All-Stars explore the “fine line between the Replacements and Randy Newman.”


The new album’s leadoff track, “Gravity’s Heart,” was the perfect way to start the set, and the rest were consistently good and sometimes great (“Campaign Trail”). I preferred the live versions of just about every tune, the extra muscle adding some welcome oomph.


Thanks to the evening’s typically tardy start, I started fading toward the end of the set. But better late than never.
Posted by Neal at 11:38 AM No comments: 100_0969
Originally uploaded by nealschmitt
Rowan loved the photo shoot. Holdie? Not so much. Oh, he'll say cheese but getting him to look at the camera is a tough, tough job. I got a couple though, that I love.
Posted by Neal at 8:26 AM No comments:

In order to get the jaw-dropping slow-motion footage of great white sharks jumping out of the ocean, the filmmakers for Planet Earth used a high-speed camera with continuous buffering...that is, the camera only kept a few seconds of video at a time and dumped the rest. When the shark jumped, the cameraman would push a button to save the buffer.

YouTube - The King of Ocean ( Great White Shark )
Posted by Neal at 7:58 PM No comments: