YouTube - We are our own devils song. Company of Thieves - Oscar Wilde

Here's what interruppted my morning … 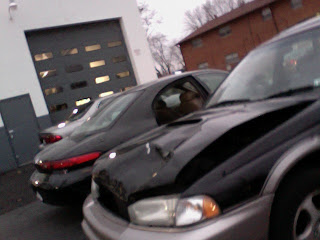 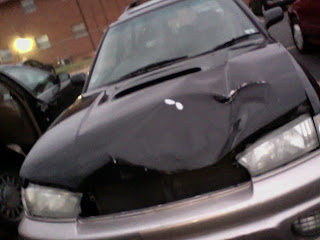 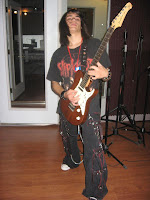 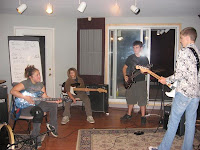 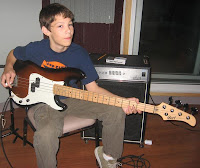 Every summer at Hocking College, I host a week long rock and roll camp for high school students. What makes this program unique from other music summer camps is that there is no audition process. All I ask is that campers are passionate about music. My job, sometimes easier - sometimes tough, is to help guide the campers through the music making process.
We start in Hocking College's awesome Mac Lab. Each camper writes two individual songs in Garageband, which in my opinion, is one of the greatest modern inventions. All the while, we're talking about song structure, lyrical content, story songs and some of the basics of music creation.

Depending on how many campers, I organize the group based on musical instruments and musicianship. In this case, I had nine campers, so we just formed one big band. The musicians start jamming in the studio and the lyricists start crafting and collaborating.

Once, we've settled on a name, other campers start designing a band logo, creating the Myspace page, organize the photo shoot and all of the other tasks that go with being in a band.

You Had Me Video by ERP - MySpace Video

ERP | MySpace Music Videos
Posted by Neal at 8:50 AM No comments:

Frank Fairfield playing "Nine Pound Hammer"
From a Rolling Stone interview ""He's kinda crazy," says Robin. "He has his own radio show where he just plays these old gramophones. He just puts a mic up and plays all these field recordings from the 1900s; it's insane. He dresses like it's the early 1900s. He's born out of time, and his voice is amazing."