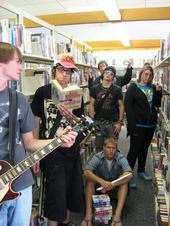 CLICK ON THE PICTURES TO HEAR EACH BAND'S MUSIC

NELSONVILLE - The guitar crackles like lightning, backed up by the rhythmic thunder of the drums. The bass throbs like a pulsing vein, rattling the speakers like a heartbeat. All of the week's work at Hocking College's Rock 'N' Roll Camp is finally pieced together, each individual track of guitar, bass, piano and drums segued together into one song, the pieces finally becoming a band.
"Starting to sound like a record?" music teacher Neal Schmitt asks rock 'n' roll camper Paul Smith.
Schmitt leans back from the soundboard controls with a satisfied smile. "That does sound pretty cool, a little sloppy, but I think it's got what it takes," agrees Smith. The Rock 'n' Roll Camp at Hocking College is about giving music everything it takes. For a week, high school students from across Ohio get to play rock stars with recording studios and tools and tricks of the trade at the tips of their fingers. The students form bands and make a song from scratch - writing lyrics,
crafting guitar licks and matching it with the drums and the bass.

The bands then post their music on Internet sites like MySpace and PureVolume, ready for the world to listen. The week-long camp, which ended Friday, was held at Hocking College's Washington Hall. This was the second year of the camp, which gives kids the chance to roam of a host of recording studios and equipment, all the ingredients for great rock 'n' roll.
"Not everybody wants to do archery or ride horses for the summer," Schmitt said. "Some kids want to spend the summer making music and being rock stars." Schmitt teaches music technology at Hocking College during the school year. Because the college's music
studios sit empty during the summer, Schmitt thought it would be a fun time for educational experience for high school students to take a shot at making their own music, providing an alternative to the traditional summer camp experience. "My high school experience was defined by playing music," Schmitt said. "Music is what made high school tolerable for me. I wasn't a jock. I wasn't going to be valedictorian. Music is what I did. I wanted other kids to experience music, learn what music can do for you."

What's great about Hocking College's Rock 'N' Roll Camp is there are no auditions, Schmitt said. All levels of ability are welcomed. Some kids have been playing music for years; others just learned how to hold a guitar. Some campers didn't play an instrument, and helped out more on the technical side or wrote lyrics. Many of the campers had never made music with other people before, Schmitt said. "We've got this camper who just learned guitar two weeks ago, and now he's going to have a guitar solo on MySpace," Schmitt said, as the camper's guitar chords screeched from behind the closed door of a practice studio. "How cool is that?"

The different levels of proficiency help the students feed off each other, Schmitt explained.
"Some of these kids have never heard of The Who; some live and die by The Who," Schmitt said. "These kids throw their different musical philosophies together and grow from it. I am really just there to guide the process. The real direction the music takes is all up to the campers."
The kids came up with names for their bands and took promotional photographs for the fun of it. The two bands formed from the camp include Property of Us and Badical, a combination of bad ass and radical, Schmitt explained.

"It's an experience where you get perspective from all sides," said Smith, a camper from the central Ohio area. "You can't just do your own thing. You have to coordinate your music with everyone else." While music might be a collaboration, actively pursuing it is what counts, Schmitt said. "I tell these campers that Prince had a No. 1 song and a No. 1 album all by the age of 25," Schmitt said. "I then ask them how old they are and what are they going to do with the next five to 10 years of their life?"

mgallagher@athensmessenger.com
Copyright © 2008 - Athens Messenger
Posted by Neal at 11:01 AM