Nice thought but this result is wrong. I finished behind Doug in 11th. But thanks for helping my ego. Can't wait to race again.

When Doug and I showed up to the Troy race, nearly the first thing we saw was a racer, unconscious on the ground, being attended to by an ambulance. Great. We registered and received our info packet and race number. Being late in the season, I hadn't applied for a US Cycling #, so I had to pay an additional 1 day license fee of $10.

While the JRs were finishing up, I reconnoitered the course briefly. Once the race was finished, the judges gave us time for one lap around the course. Wow - there are a lot of turns. 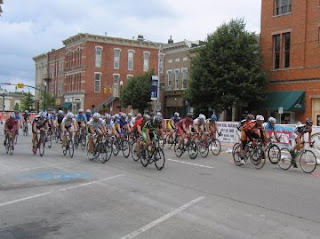 They called us to the line and while I was nervous, my heart rate wasn't going too crazy. The judge gave out a few quick details and shouted "Bang!" - the race was underway.

24 riders, no one with that much experience. If they had experience, they would be racing CAT 4. Nice gentle push off and with surround sound of pedals clicking into place, the group heads for turn one. Nice and easy. There's some communicating in the pack to let racers know that they're on the inside or outside of another racer. I'm not one of them. I'm very tightlipped. But hearing the chatter reminds me to communicate.

The laps start to tick off. The pace, while not easy, is definitely not hard. I grab onto a wheel and

keep my position until that rider starts to fall back. I spot another rider and make the jump. Sometimes I'm near the front, other times, I'm near the back - but always with the main group. Rounding the fountain is a bit tricky. Nearly 270 degrees of turning and you have to stay on your line. After the fountain is a long straightaway. The pace always got high here. And of course, the wind is hitting right in the face - so I was always looking to ride someone's wheel - except for lap 10. For some reason, the peloton (hardly but it's nice to say) wasn't going its usual quick pace. Everyone sorta slowed down. I found myself riding at a comfortable pace, on the inside of the group, about halfway back with a clear shot right up the line. I had about three seconds to think about it and thought "this is the only workout you're doing today, you'd better make it a good one." So I took it.

I reached down on the drop bars, popped into a bigger gear and just gunned it right past the grandstand and all of the other racers. I knew they'd jump on me but I had nothing to lose.(except the race and I wasn't going to win that anyhow) Two thoughts crept into my mind 1) holy crap it's fun to go fast and in the lead and 2) I have no idea how to corner going this fast but luckily I get whatever line I want.

It also only lasted about one lap. I ran out of gas. Right about the same place, another rider guned it up the outside, leaving me in a whimpering, thigh burning heap. Didn't matter. It was totally fun.

I squeezed everything I could out of my legs and clung to the back of the lead group. The finishers sprinted it out. I dug in and gave whatever I could to the sprint, ending a few seconds after the leaders. My chest was feeling the pains of going anaerobic but I loved it. Not exactly the best way to lead into an Olympic triathlon the next morning, but certainly a way to get addicted to criterium racing.
Posted by Neal at 12:11 PM